I thought about going to NYU film school—that was this ideal to me. But I didn’t make any kind of grades in high school. My mother was a single mom, putting my three sisters through college, and I was such a bad student that I knew I had no right to take her money. But I loved classes and learning.

Henry J. Kaiser, multi-millionaire founder of Kaiser Aluminum. A high school dropout, he was apprenticed as a photographer’s apprentice when he was 13. At the age of 20 he bought the photography business.

Travis Kalanick, billionaire founder and CEO of Uber. He dropped out of UCLA a few months before graduation to join the founding team of Scour (a multimedia search engine and file-sharing exchange).

Rob Kalin, multi-millionaire founder of Esty. He flunked out of high school, briefly enrolled in an art school, and then faked an MIT student ID so he could take classes on the sly. His professors were so impressed that they helped him get into NYU where he learned how to build a website. He founded Esty with two classmates.

Dean Kamen, multi-millionaire inventor of the Segway. He dropped out of Worcester Polytechnic Institute.

Ingvar Kamprad, billionaire founder of IKEA, one of the richest people in the world. A dyslexic, he never attended college. When he was 17, his father gave him a reward for succeeding in his studies. He used this money to establish what became IKEA. As a child, he peddled matches, Christmas decorations, fish, and other sundries via his bicycle.

Donna Karan, fashion designer. She dropped out of Parsons School of Design at the age of 18.

Alex Karras, football player, actor. He never graduated from college. As he pointed out, “I never graduated college, but I was only there for two terms – Truman’s and Eisenhower’s.”

Li Ka-Shing, billionaire, one of the wealthiest investors in Asia, plastics manufacturer, real estate investor. He had to leave school at the age of 12 to work in a plastics factory in order to support his family after his father’s death. He never attended college.

Byron Katie, spiritual leader and author. She dropped out of the University of Northern Arizona before the end of her freshman year to get married.

Ben Kaufman, serial entrepreneur, founder of Kluster (a virtual forum that allows consumers and businesses to collaborate on the design of products and services). He dropped out of college in his freshman year.

Elaine Kaufman, owner of Elaine’s restaurant, a Manhattan cultural institution. She barely passed high school. She did not attend college.

George S. Kaufman, playwright and critic. After graduating from high school, he tried law school for three months, grew disenchanted, and went on to various odd jobs. Eventually he became a drama critic and later a playwright.

Diane Keaton, née Diane Hall, Oscar-winning actress, director, and producer. She flew to New York City at the age of 19 to try finding success as an actress. She attended acting schools but never completed any college.

Bil Keene, cartoonist. His parents couldn’t afford to send him to art school after high school, so he worked as a newspaper messenger at the Philadelphia Bulletin before joining the army during World War II (where he drew a comic strip for Stars & Stripes). After the war, he became a staff artist at the Bulletin.

Toby Keith, country music singer. After high school, he joined his father to work in the oil fields. His biggest regret, though, is never having attended college.

Minka Kelly, actress, nurse. She attended one year of nursing school and then became a surgeon’s assistant. But she went on casting calls in her free time. She finally got an acting job on the Friday Night Lights TV show.

Anna Kendrick, actress. She postponed college in 2004 to act and has not yet attended college. She became active as an actress at the age of 12 (acting in a Broadway show).

Alicia Keys, singer and songwriter. She graduated from New York’s Professional Performing Arts School at age 16. She then enrolled at Columbia University but dropped out after a semester to sign with Columbia Records.

Adnan Khashoggi, billionaire arms dealer. He dropped out of Chico State after brokering a sale of trucks to Egypt.

Jewel Kilcher, singer and songwriter. Jewel scored a major recording contract at the age of 18. At the time she had been traveling around California singing at coffee houses and sleeping in her car. Her first album sold 11 million copies. She has not attended college.

Jared Kim, founder of WeGame. He dropped out of the University of California at Berkeley halfway through the spring semester of his freshman year to devote himself full-time to starting the online gaming site WeGame.

Thomas Kincade, the painter of light, inspirational speaker, and house designer. He attended the University of California at Berkeley and the Art Center College of Design for brief periods but dropped out to become a set painter in Hollywood.

B.B. King, aka Riley King, blues musician, songwriter, and legend. He never finished high school. After being in the Army during World War II, he started performing in Memphis night clubs.

I have two laptops. I didn’t finish high school, so one is my tutor: I buy software on things I don’t know. I write music with the other. — B.B. King

The beautiful thing about learning is nobody can take it away from you. — B.B. King

Ben E. King, R&B singer and songwriter. He never attended college. He moved to New York City as a young man and immediately became involved in the hot music scene.

Elle King, singer and songwriter. She dropped out of the University of Arts in Philadelphia, Pennsylvania, to play music and to follow a guy she fell in love with to Denmark.

Jamie King, model and actress. She moved to Los Angeles at the age of 19 to pursue a career as an actress. She has not attended college.

Michael Patrick King, screenwriter and showrunner. He dropped out of Mercyhurst University after three years to move to New York City to write plays and do comedy.

Pat Kingsley, publicist to the stars, president of PMK. She dropped out of Winthrop College after two years. She eventually became a publicist.

Joel Kinnaman, actor. He did not graduate from high school.

I didn’t graduate from high school because I was there only 40% of the time. So I didn’t have many things that were pointing any good direction, and acting was the first thing I felt I might actually be good at. — Joel Kinnaman

Robert Kirkman, comic book writer, producer. After graduating from high school, he went right into creating comic books by founding his own publishing company, Funk-O-Tron. He later worked for Image Comics where he developed The Walking Dead series which ultimately led to creating the TV series of the same name.

Taylor Kitsch, actor, model. After high school, he played for the Langley Hornets. He then became a model for a short while before heading to Los Angeles to become an actor. His big break was Friday Night Lights. He has not attended college.

Eartha Kitt, Emmy-winning actress, dancer, singer, author, and sex kitten. She dropped out of the High School of Performing Arts to take various odd jobs. She eventually landed a job with the Katherine Dunham dance troupe.

I am learning all the time. The tombstone will be my diploma. — Eartha Kitt

Felix Kjellberg, aka Pewdiepie, YouTube video gaming star. He dropped out of Chalmers University of Technology to pursue his love of video gaming. His videos have been viewed over 11 billion times. He clears about $12 million a year doing what he loves.

Karlie Kloss, model, fashion designer. At the age of 15, she went on her first casting call in New York City (from her home in Missouri). By the time she was 18, she owned her own apartment in the city. She has never attended college.

Chris Klein, actor. He completed only two semesters at TCU before starring in the American Pie movies.

Heidi Klum, German supermodel, actress, fashion designer, television producer, and host of Project Runway and Germany’s Next Top Model. One of Forbe’s 2008 Celebrity 100, she makes $14 million per year. She became a model immediately after graduating from high school.

I think that risk-taking is intelligent. When you do things you normally don’t do, you learn about yourself—you change, and you evolve. Change is important. — Heidi Klum, model

Keira Knightley, actress. She never attended college, but wishes she had.

Jan Koum, billionaire founder of WhatsApp. He dropped out of San Jose State University to work at Yahoo! As he noted, “I hated school anyway.”

Bruce Kovner, billionaire hedge fund operator, founder of Caxton Associates, chairman of Julliard. He dropped out of a Ph.D. economics program at Harvard to drive a taxi in New York City.

Jan Kramer, ice skater, actress, country singer. “The day I graduated from high school, I left for New York City,” where she began acting in All My Children. Soon after, she left for Los Angeles to pursue her acting career. She got parts on 90210, Entourage, and Friday Night Lights before getting a role on One Tree Hill.

David Kravitz, early employee at Snapchat. He dropped out of Stanford Univeristy to work on Snapchat.

Jordan Kretchmer, founder of LiveFyre, a content curation and marketing app. He is a college dropout.

Ray Kroc, multi-millionaire founder of McDonald’s. He was a high school dropout.

Chad Kroeger, frontman for Nickelback rock group. In a Playboy magazine interview, he noted that “I didn’t go to school. I mean, after the eighth or ninth grade, I don’t remember going to school five days out of the week, ever.” He was a few credits short of graduating from high school when he left school and took to the road.

Bernard Kroger, multi-millionaire founder of Kroger supermarkets. He went to work at the age of 13 to help support his family. He never attended college.

Stanley Kubrick, movie director and producer, screenwriter, photographer. His poor high school grades made it impossible to attend college. He did take some photography classes at CCNY but never graduated from any college.

Mila Kunis, actress. She briefly attended college, but had an epiphany: “I decided I wasn’t going to take [my career] seriously and make my job who I am. I just want to be happy with my life.”

During the production of That ’70s Show, she had attempted to go to college but soon realized that L.A. traffic made it virtually impossible to go to school at 6:00 a.m. and still make it to work at 10:00 a.m. She was the first person in her family not to become a college graduate.

Olga Kurylenko, model, actress, Bond girl. She began modeling at the age of 14 in Moscow, Russia. She soon moved to Paris, France for more modeling work. Then she moved on into acting. She has not attended college.

Ashton Kutcher, actor, producer, entrepreneur, model. He dropped out of the University of Iowa to become a model. 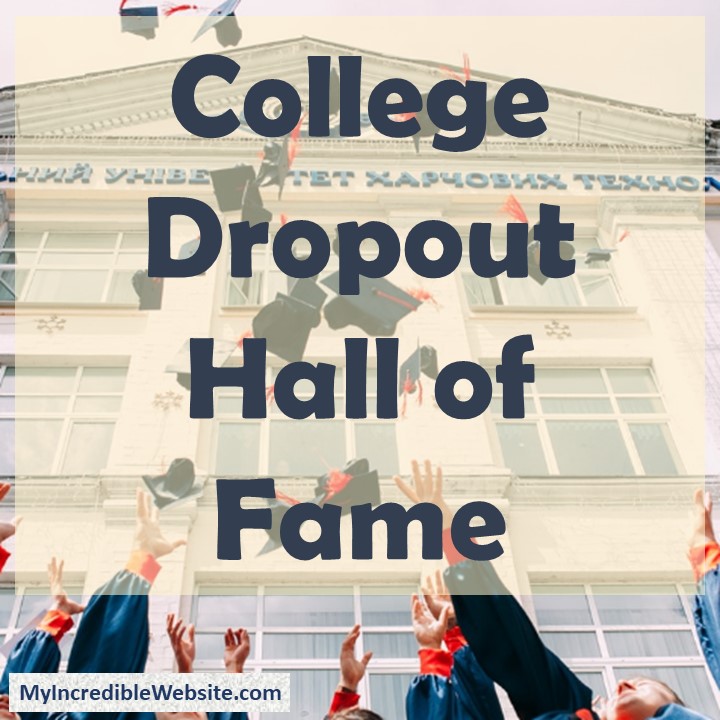 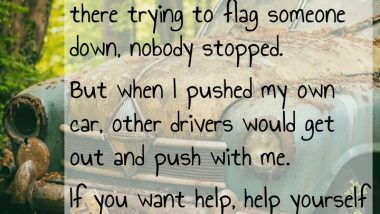 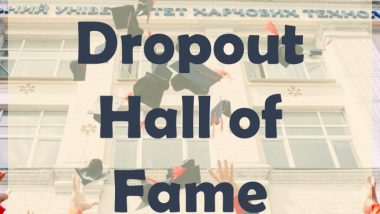