Check out this timeline of pronouncements made by WHO during the beginning of the Wuhan virus epidemic (aka Covid-19 virus) in 2019 and 2020.

December 31st WHO’s initial Wuhan virus alert indicated that there was no evidence of human-to-human transmission, despite warnings from the Taiwanese CDC.

January 5th WHO news release: “Based on the preliminary information from the Chinese investigation team, no significant evidence of human-to-human transmission and no health care worker infections have been reported.”

January 9th WHO news release: “According to Chinese authorities, the virus in question can cause severe illness in some patients and does not transmit readily between people.”

January 12th WHO news release: “At this stage, there is no infection among healthcare workers, and no clear evidence of human to human transmission.”

January 13th WHO news release: “The way these patients became infected is not yet known. To date, there has been no suggestion of human to human transmission of this new coronavirus.”

January 14th WHO news release: “Based on the available information there is no clear evidence of human-to-human transmission. No additional cases have been detected since 3 January 2020 in China.”

January 14th WHO tweet: “Preliminary investigations conducted by the Chinese authorities have found no clear evidence of human-to-human transmission of the novel #coronavirus (2019-nCoV) identified in #Wuhan, #China.”

January 19th WHO tweet: There is only the possibility of “some limited human-to-human transmission occurring between close contacts.”

January 20th WHO statement: “It is now very clear from the latest information that there is at least some human-to-human transmission of #nCov2019. Infections among health care workers strengthen the evidence for this.”

January 28th Dr. Tedros statement: In this statement he praised China’s response to the Wuhan coronavirus.

January 30th WHO statement: “We declared the highest level of global emergency on Covid-19. …  During that time, as you may remember, there were only 82 cases outside China. No cases in Latin America or Africa, only 10 cases in Europe. No cases in the rest of the world. So the world should have listened to the W.H.O. then carefully.”

February 1st WHO statement: It’s not too late to stop the new coronavirus outbreak: the disease may not be spreading as rapidly as is feared.

February 4th WHO tweet: “According to recent reports, it may be possible that people infected with 2019-NCoV may be infectious before showing significant symptoms. However, based on currently available data, the people who have symptoms are causing the majority of virus spread.” 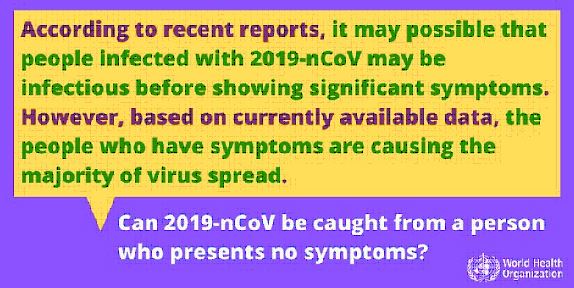 February 4th WHO advisory: Don’t set trade or travel restrictions against China. Such measures could cause fear and stigma.

February 6th WHO tweet: “We don’t know the source of the #2019nCoV outbreak, we don’t know what its natural reservoir is and we don’t properly understand its transmissibility or severity.”

February 11th WHO situation report: “The route of transmission of 2019-nCoV to humans at the start of this event remains unclear.”

WHO proclamation: When Xi ordered Chinese health officials to use “integrated Chinese traditional herbal medicine and Western medicine” to treat the Wuhan virus, WHO instantaneously removed herbal medicine from a list of ineffective treatments.

March 11th WHO statement: They finally proclaim the Wuhan coronavirus as a pandemic.

March 30 statement from WHO executive director of Health Emergencies Program: “Now, we need to go and look in families to find those people who may be sick and remove them and isolate them in a safe and dignified manner.” (Just like China did in arrresting and disappearing dissenters.)

April 14 order from President Donald Trump: A freeze on U.S. funding for WHO, saying the organization put “political correctness over lifesaving measures.”

April 29 statement from WHO executive director of Health Emergencies Program: “Sweden represents a model if we wish to get back to a society in which we don’t have lockdowns.” (Finally, WHO recognizes what really works.)

May 1 statement from the WHO’s representative to China: China has refused to allow WHO to take part in an investigation into the origin of Covid-19.

May 22 WHO teleconference: WHO Director-General Tedros Adhanom Ghebreyesus says we need more money.

May 25 WHO announcement: WHO will temporarily stop hydroxychloroquine trials due to reported safety concerns.

June 2 AP news story: WHO officials worried that if they openly accused China of wrongdoing, the Chinese Communist Party would stop cooperating and might commit violence against Chinese scientists.

June 8 WHO announcement: WHO announces that asymptomatic carriers of COVID-19 rarely spread the virus.

June 29 WHO director-general declaration: “Although many countries have made some progress, globally the pandemic is actually speeding up. We’re all in this for the long haul.”

June 30 McCaul Report announcement: The Chinese Communist Party never reported the virus outbreak to the WHO in violation of WHO regulations.

Source: This list of WHO (World Health Organization) statements is excerpted from an article in the Washington Post with additions from newer news sources and tweets.

Check out this timeline of pronouncements made by WHO during the beginning of the Wuhan virus epidemic (aka Covid-19 virus) in 2019 and 2020. #Covid19 #WuhanVirus #WHO Click To Tweet 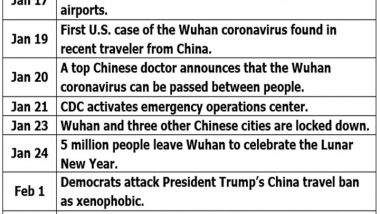 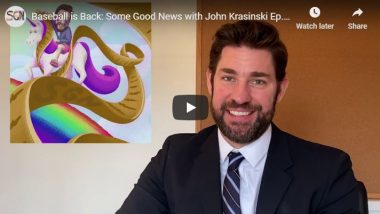