Tweets reveal the truth about the disaster that is the Biden presidency. Check out the tweets:

Now the dictator move is on the other foot. Except in this case, it’s the highly hypocritical foot of Joe Biden. — Nick Arama, columnist, RedState

California has so much poverty and fires, and all these liberals are dumping on the Texas Governor. — Real Deal Axelrod

In fairness, it’s not like Biden campaigned on following science and having a thorough and detailed COVID plan. — Guy Benson, political editor, Townhall

I stand with @GovRonDeSantis. I stand with @govkristinoem. I stand with leaders who trust their constituents to exercise their freedoms and responsibilities as they all choose. We need more leaders like these two governors. — Andy Biggs, U.S. representative

ANTIFA is back on the streets of Washington DC causing mayhem. Last night, they chanted “if we don’t get it, burn it down” as they confronted police officers. ANTIFA is a domestic terrorist organization and should be declared as such. More to come on that! — Lauren Boebert, U.S. representative

You just look silly for pointing out that Biden lied, says the fact-checker guy who can apparently read minds in order to judge “stumbles.” — Bonchie, columnist, RedState

Kamala Harris is doing his head of state calls and he hasn’t reached out to any governors about this major storm? Yeah, I’d say so. He’s probably drooling in bed right now. — Bonchie, columnist, RedState 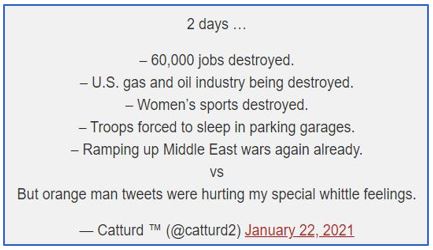 There are still 6,000 National Guard troops in Washington, D.C. There is no imminent threat. Bring. Them. Home. — Madison Cawthorn, U.S. representative

President Biden has expressed a preference for a fire built in the Oval Office fireplace, and sometimes adds a log himself to keep it going. Unlike his recent predecessors, he’s more of an early-to-bed type. Here’s how Biden is settling into his new job. — CNN

Imagine freezing to death and knowing Joe Biden is going to bed at 7pm. — Comfortably Smug

Biden claims during CNN Town Hall there was no vaccine when he came into office. First shots were administered in mid-December. This isn’t a semantical thing or the president misspeaking. It’s a straight up lie on a very important point. — Joe Concha, columnist, The Hill

If your house has power and is nice and warm this morning, you can thank the Oil, Coal, and Industries that the Democrats are trying to destroy. — Matt Couch, investigator, DC Patriot

Joe Biden is controlled by his CCP handlers. We must not be silent. If not us, then who? — David Croom

Joe Biden says black people and Hispanics don’t know how to use the Internet and can’t figure out where to get the vaccine. — Mark Dice, media analyst

Donald Trump is more likely to be a candidate for President in 2024 than Joe Biden, and everyone on both sides knows it. — Matt Gaetz, U.S. representative

If the Biden administration wants a travel restriction, why don’t they restrict travel in New York from COVID hospitals to the nursing homes? — Matt Gaetz, U.S. representative

Governor DeSantis is showing how the America First pro-citizen agenda works in a dynamic and diverse state like Florida. — Matt Gaetz, U.S. representative

I mean, one of the very core functions of education is to prepare each of us for citizenship. — Ken Gardner

Under a GND, a higher percentage of the grid would be powered by two technologies—solar and wind—that just plain don’t work in the extreme winter conditions in which we are still in right now. — Ken Gardner

US must not turn a blind eye to China’s treatment of the Uighurs and must hold the Communist regime in Beijing to account. — Nile Gardner, foreign policy analyst

This goes on all the time. The Democrats control everything in California and the media are just now getting around to noticing it’s a problem. — Richard Grenell, former ambassador

If you are a reporter who’s written about Biden playing Mario Kart but not about Biden’s refusal to call the leader of Israel then you should learn to code. — Richard Grenell, former ambassador

We haven’t heard a peep out of Pres Biden—who formerly called Cuomo the “gold standard” for handling a pandemic. The media’s abdication of responsibility is appalling. Time for them to step up, do their jobs, and demand answers from Cuomo—not turn a blind eye to his deception. — Nikki Haley, former U.N. ambassador

While much of the country suffers under a weather-related crisis and millions of Americans are without power, the president is playing video games. Did I do that right? — Julie Kelly, contributor, American Greatness

It was a verbal stumble, a typical Biden gaffe, as he had already mentioned 50 million doses being available when he took office. Ex Trump officials should especially cool the outrage meter, as it just looks silly. — Glenn Kessler, supposed fact checker, covering for Biden (a typical gaffe)

While Biden was killing the Keystone pipeline from which the United States and American workers would greatly benefit, Biden appears to be promoting a pipeline aimed at enriching one of the world’s worst dictatorships, a group responsible for thousands of U.S. deaths. — John Kremer, author

People are literally sleeping in their cars right now to avoid freezing to death and CNN is running stories on Joe Biden playing Mario Kart. — LifeNews.com

I can assure you that this president is not looking to the last presidency as the model for his foreign policy moving forward. — Jen Psaki, White House press secretary — Yes all those peace deals and no wars. Let’s absolutely change gears. — Bethany Mandel, editor, Ricochet

Under Biden’s plan, more schools would actually be CLOSED than currently are. From schools to vaccines, Biden’s “goals” are actually bringing us backward from what President Trump actually accomplished. — Ronna McDaniel, GOP chairperson

The Democrats are showing that they never meant it when they called for unity. They are prioritizing a divisive post-presidency impeachment while trying to jam a hyper-partisan far-left wish list through Congress as Biden issues executive orders at the fastest pace in history. — Ronna McDaniel, GOP chairperson

Signing off with a final notable quote from Joe Biden during his town hall this evening: “Everyone knows I love kids better than people.” — Kayleigh McEnany, White House press secretary

Stop including Larry Hogan in your future of the GOP pieces. He supports Roe v. Wade, opposes the Second Amendment, and was against Brett Kavanaugh. Whatever the future of the Republican Party is, that’s not it. — Varad Mehta, political commentator

Everything is opposite with the left. The real racist, Biden, is portrayed as not racist, while the most pro-black President, Trump was portrayed as racist. It’s Inversion of reality. — The Right Melissa

What the climate alarmists won’t tell you is that their green energy is not really green. The only thing green about it is the money they make lying to you. It takes lots of fossil fuel to make just one wind mill & the blades end up in Landfills. — The Right Melissa

Biden is clearly just a ceremonial puppet. His orders are simple: Sign the papers put in front of you, walk the dog, and throw another log on the fire. Question is – who’s the “Prime Minister” actually pulling the strings? — Rogan O’Handley, civil rights activist, DC Draino

New Rule of Thumb: Do the opposite of what Bill Gates wants. — Rogan O’Handley, civil rights activist, DC Draino

Join @OANN’s @christina_bobb as she explores the controversy surrounding the 2020 presidential election in Arizona. Why was there no recount? How 36,000 non-citizens get to vote? Where is the forensic audit? — One America News

Reparations are not the way to right our country’s wrong. — Burgess Owens, U.S. representative

If you’re smarter than a 5th grader, you realize that the radical Left is trying to brainwash the world into believing January 6th was similar to 9/11 or Pearl Harbor. Absurd. Just a sloppy attempt to justify censoring, surveilling & treating half our country like terrorists. — Candace Owens, founder of BLEXIT

Those who call Trump supporters “conspiracy theorists” for wanting election integrity are the same who believe in the thoroughly debunked Russian Hoax. Who are the real conspiracy nuts here?! — Andrew Pollack, author

Joe Biden has been in govt 50 years and spent all of them aiding China’s rise and the decline of middle America, no reason to think he would change suddenly. — Jack Posobiec, China analyst

Kamala Harris Reminds Everyone Why She’s Not President in a Train-Wreck Interview. — RedState

Lmao….. and so it begins… the lady who polled a 0 will become president after this president is deemed naturally unfit. So the guy who got 80 million votes will be gone and the one who got 0 votes will be in. Their first choice all along…. Talk about a coup... — E J Rose

Trump is more popular than ever while the fake leader in the White House is nowhere to be seen. The best is yet to come! — Antonio Sabato, Jr., actor

Have a beautiful blessed day even to the ones that write mean things to me even though they don’t know me and just because my opinion is different than theirs I love you anyway God bless you peace love and moving on. — Antonio Sabato, Jr., actor

Biden 2020: “Why isn’t there a national plan?!” Biden today: “I can’t force states to do anything.” Amazing. — Eddie Scarry, DC Examiner

But @joebiden doesn’t know he lied. Because he doesn’t know anything. He’s oatmeal north of the eyebrows. — Nick Searcy, actor

One of the biggest reasons the Democrats won’t open all the schools now: with covid still out there, if schools reopen now and kids and teachers were fine (they would be), any rational person would ask: “Why the hell did we close down schools in September at all?” Exactly. — Buck Sexton, host, The Buck Sexton Show

What do we do when we finally understand that the elections really are stolen? Or rigged? Or thrust out of our reach by the manipulations of rich and powerful people? Corrupted by corporations? How long does it take before we call the bluff? Another disappointing election cycle? Two? Three? How much more gerrymandering, corporate buying of elections, voter disenfranchisement, and outright fraud can we stand? When will we take seriously the necessity of change? — Rivera Sun, editor, Nonviolence News

Flashback: Just SIX days ago, @PressSec said the Biden administration’s goal for opening schools within his first 100 days is “one day a week.” — Townhall.com

Joe Biden is playing Mario Kart while Americans are dying… Am I doing this right? — Donald J. Trump, Jr., author

Mere hours after his death, Liberals are dancing on [Rush Limbaugh’s] grave. The giant of conservatism was branded a “white supremacist,” “evil,” and a “misogynist.” — Washington Examiner

There are still dozens of white people with huge Trump flags standing on an overpass near my home protesting the outcome of the election. In February. — Shannon Watts, founder, Moms Demand

HELP ME WITH MY MATH!! I’m lost. If 80+ million people voted for Joe Biden, then why was Donald J Trump trending on #PresidentsDay? Why is President Trump getting more love than Joe, if Joe is the most loved person in the country? Raise your hand if it don’t add up. — Terrence K. Williams, comedian

Now he’s doing the same with people freezing to death in Texas. He loves capitalizing off of death even more than he loves skateboarding. — Tim Young (talking about Beto) 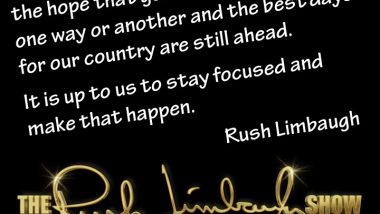 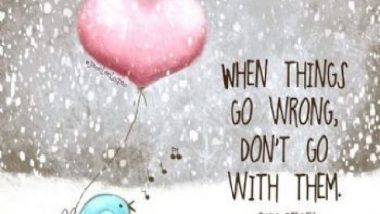